Online Catalogue | About Us | My Login
Dr. Mitchell Gaynor, M.D.

Embrace the "Healing Power of  Sound" with
Dr. Gaynor and  Crystal Singing Bowls

Mitchell L. Gaynor, M.D. is Founder and President of Gaynor Integrative Oncology  and Clinical Assistant, Professor of Medicine at Weill Medical College, affiliated with Cornell University and New York Hospital. He has held the position of Director of Medical Oncology at The Strang Cancer Prevention Center where he still serves as a consultant.

He is also former Medical Director and Director of Medical Oncology at the Weill-Cornell Medical Center for Complementary and Integrative Medicine. He has served on the Executive Review Panel at the Department of Defense - Alternative Medicine for Breast Cancer Sector and the Smithsonian Institute"s Symposium on New Frontier in Breast Cancer and the Environment. He is a frequent speaker and lecturer at hospitals, conferences and universities throughout America and abroad.

In addition to his work with sound and singing bowls, he has published studies on oncology and the effects of environmental toxins on health in peer review journals such as Seminars in Hematology, The American Journal of Clinical Oncology, The Proceedings of the American Society for Clinical Oncology and Environmental Health Perspectives. For his work, he was awarded the New York State Assembly"s "Environmental Advocacy Award" and named "Environmental Advocate of the Year" by the Mid-Hudson Options Institute in 2002. 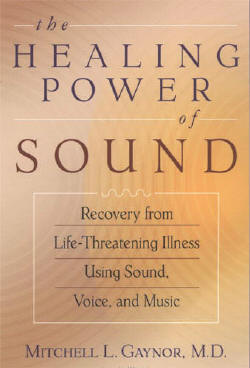 Dr. Gaynor is well known in the media as an integrative medicine specialist and is frequently called upon to discuss such topics as nutritional aspects of cancer prevention; environmental threats to health; complementary cancer therapies; the dangers of carcinogens and health; and spirituality and healing. He has been featured in many national newspapers, including The New York Times, USA Today, Newsday, The New York Post, and New York Daily News. He has also been a source for articles in many national magazines including Newsweek, Publishers Weekly, Self, GQ, Healthy Living, New Texas Magazine and USA Weekend.

His appearances on television and radio are extensive, and he is contstantly sought after as an expert practitioner of sound therapy.

Articles
Find one of our
Crystal Temples
worldwide